On December 4, we attended a read-through of Heathers the Musical, the controversial 2014 Off-Broadway cult classic about a powerful and ruthless high school clique during the 1980s. The show is a stark satire of vicious high school pranks that is highlighted by lines such as when school newcomer Veronica, who wishes to be indoctrinated into the school’s in-crowd, ruefully observes, “They’re going to have to send my SAT scores to San Quentin.” The musical is being staged by YA4Ever, the alumni group of Young Artists Ensemble. The show opens at the Hillcrest Center for the Arts on January 5.

A read-through marks the first time a cast gets together after studying a script on their own. Most audiences never get to see a read-through and how a cast works together for the very first time. A read-through establishes not just the chemistry of the players, but also determines the flow of the show and is the first real step in bringing a musical to life. The experience was fascinating. We were positioned in front of the cast, which was situated in a semi-circle in front of the director, accompanist, and music director. What was most amazing about the experience was seeing how the actors had already pretty much secured relationships with their respective characters. The read-through proceeded with few stops, almost as if it were already being presented on stage. The cast, which includes some familiar faces from prior YA4Ever shows, stars Carly Jean Paul as Veronica Sawyer, Jared Price as J. D., and Kate Froehling, Shayde Bridges, and Karlee Squires as the three Heathers. During a break between Acts I and II, we got a chance to talk with director Timothy Reese about the process.

VCOS: How long had the cast had scripts before they started the read-through?

VCOS: And this is the first time they’ve all been together?

TIM: Yes, the first time everybody’s been in the same room.

VCOS: How many times have you directed before?

VCOS: Are there any lessons that you’ve learned that have helped you in subsequent shows?

TIM: Knowing your team and the people you choose to work with is everything, and I think with this one, we’ve really lucked out. Everybody’s bringing their “A” game. When you’re directing a show, it’s really the most important thing, getting together a group of people who are going to bring everything to the table and I really think we did that with this.

VCOS: So trust is a big part of it then.

TIM: Trust is absolutely a big part of it.

VCOS: When you’re conducting a first reading, what kinds of things are you looking for?

TIM: I like to see what everybody’s instincts are. This first reading is a little bit different from things I’ve done in that the music has been pretty much taught all the way through. We’ve actually done some choreography rehearsals as well, but as far as first read rehearsals go, I like to see where just reading through what people look at at a first glance, who these people think these characters are. I could tell them who they are, but it won’t be real unless it comes from them.

VCOS: Does it surprise you how good the timing is of the lines?

TIM: Obviously we have a long way to go, but everybody surprised me with how much they get the humor, the timing, and the pacing of the show. We’re not opening tomorrow, but everybody’s getting it already and it’s really cool to see everyone understanding the flow of the show after reading it for the very first time.

VCOS: Most audiences are not schooled in what happens during a read-through, what it actually looks like. Some sit around a table when they go through a script but you have it set up in a semicircle with the men on one side and the women on the other. Was there a reason why you did it this way? 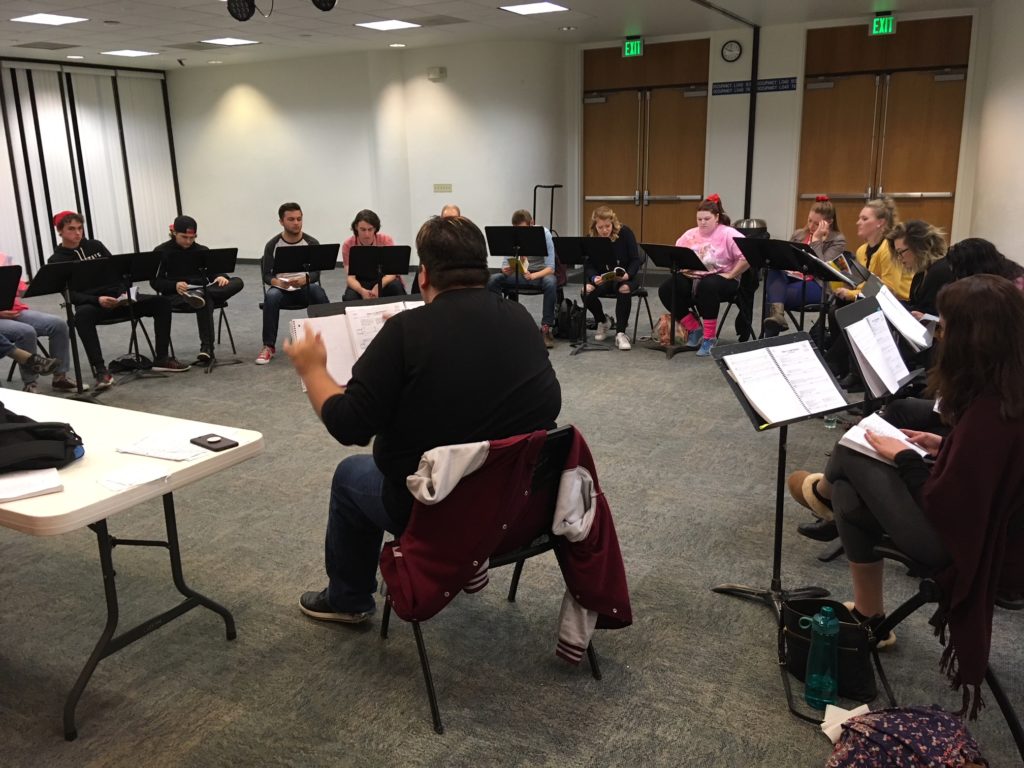 TIM: This is very specifically done so that we can have everybody divided into parts vocally. Tyler Stouffer, my amazing music director, helped set that up. He knows exactly what he wants it to sound like and where everybody needs to hear each other. And since the music is still being worked on, we really want it to be the best it can possibly be at this point. So that was created really for acoustic reasons. Traditionally, read-throughs are just as you described them, people sitting around a rectangular table, reading the script. And the director will stop and say, “and there’s a song here.” But with this show, there is so much music integrated into the story, we felt we really couldn’t do it without singing the songs and doing everything at once.

VCOS: And when you skip songs in this show, you lose plot points.

VCOS: Do you feel that there’s an elephant in the room – the reality of the violence that is going on in schools today?

VCOS: So are you walking a tightrope between satire and bad taste?

TIM: We definitely are. The show is really interesting in that it’s inspired by a movie that came out pre-Columbine. The musical started workshops in 2011, which was definitely post-Columbine. Taking things that were, in the ’80s, just wild fantasy weirdness and transplanting them into a world where it’s not a “what if” anymore, where this kind of stuff happens all the time. When you’re on stage it’s fun to get caught up in it, but there’s definitely a point in the show where it gets real and I think that’s really the heart of the show. So yeah, we’re definitely going to be walking a fine line, making sure that while the audience is having a fun time, we need to deliver what the show is really about.

VCOS: In the beginning, it’s almost like the show is a raunchier version of Fast Times at Ridgemont High. But Heathers makes that look like Happy Days.

TIM: The show does get dark, yes. And then right after it gets dark, it gets real.

VCOS: So what’s the next step after the read-through?

TIM: We start going through choreography and blocking, we’ll have some musical refinements, and from here on out, it’s just barreling through until tech and opening.

VCOS: Heathers is perfect for Off-Broadway, but do you think this show will ever hit conventional Broadway theaters?

TIM: I don’t know. I feel like this is a show that runs with a popular crowd. It sells out every time I’ve seen it. I’ve been in it once and we sold out, but I think it’s a very specific cult classic type audience and I don’t think that’s what Broadway is for. Off-Broadway is a place for more daring pieces so this is that show for us. It’s for a really intimate space where you can dare to do things that other people don’t do.

Tickets to YA4Ever’s production of Heathers the Musical are on sale now! Get yours today at HillcrestArts.com, YAEonline.com, or by calling 805.381.1246. The show has a limited run at the Hillcrest Center for the Arts from January 5-14. Due to vulgar language, violence, and disturbing situations, no one under 17 will be admitted without a parent or guardian.