Game on! The cast of "Clue: The Musical" (photo by Kaela Watso)

After seeing Moorpark College’s imaginative production of Clue: The Musical last week, we decided to return to go behind the scenes to see how they designed and crafted the remarkable makeup and costumes that the cast wore during the show. Our tour guides were director John Loprieno and costume designer Nichole Jackson. Jackson, who graduated from Moorpark in the spring, was a transplant from College of the Canyons who arrived to learn more about costume design. Her work in inventing the elaborate wigs (made from 2 mm craft foam), garish makeup, and painted costumes worn by the characters is the highlight in Clue, a fast-moving, often anarchic musical transformation of the popular board game.

VCOS: When you look at pictures and videos of other performances of Clue: The Musical, you see the characters wearing color-coded costumes to represent the game pieces, but not much in the way of makeup or wig design. What gave you the idea to come up with something different and more elaborate?

JOHN: I try not to look at what other productions did before I direct something. Sometimes it’s because I don’t want to muddy the waters. I don’t want to see something and have it embedded in my mind. In all honesty, we had a production meeting with costume supervisor Haleh Risdana and technical director Brian Koehler, who are our faculty members, and they asked me what my concept of the show was. I told them that when I think of Clue, I think of the little cartoonish cards that I used to play with when I was a kid. So I started thinking along the lines of something very cartoony and two-dimensional. So they took that and went to their student designers, including Jake Arpata, who is our scenic designer, and chose to do a deconstructed game board, because we were doing it in the round. And Nichole decided that using cel-shading would be a perfect complement to that two-dimensional, cartoon look.

VCOS: What is cel-shading?

JOHN: That’s what this technique is called. They use it in cosplay at Comic-Con. Nichole can tell you much more about that. She lives in that world. But that was her concept.

VCOS: How long have you been doing this, Nichole?

NICHOLE: I have been costuming now for four years and am basically entirely self-taught. I spend all of my free time studying costume making and techniques.

VCOS: What is the concept behind the facial makeup?

NICHOLE: I’m in the cosplay community and I teach costume making and prop making. In that area there are a lot of people who make costumes from video games, one of them being Borderlands, which is a first-person shooter game where all the characters look like they are from comic books but they are actually three-dimensional. Their clothing is drawn or painted to look flat. So from the cosplay community there are people who take these 2-D/3-D characters and they paint their clothes to imitate or “cosplay” that character. So when Haleh told me that we were doing Clue: The Musical, I thought about the game pieces, which are like those in a video game, so I thought it would be cool to make them look like they came from a comic book, especially because Jake’s set design was based on a comic book version of Clue as well. So Haleh loved it and I got pictures and showed them references and we did it.

VCOS: So it’s more the look of a video game than it is a game piece on a board game?

NICHOLE: Yes. Because Jake’s design was based on a comic book and the whole cel-shade design and art technique in comic books, and because the video game and cosplayers had brought that comic cel look to their bodies, I thought that would be the perfect blend of all the themes that we were playing with.

VCOS: How is it wearing those wigs?

JOHN: You guys did a lot of training in learning how to do your makeup. How many hours does it take?

SARAH: It takes about an hour to learn how to do it and then we just practice on our own.

JOHN: So everybody does their own makeup? 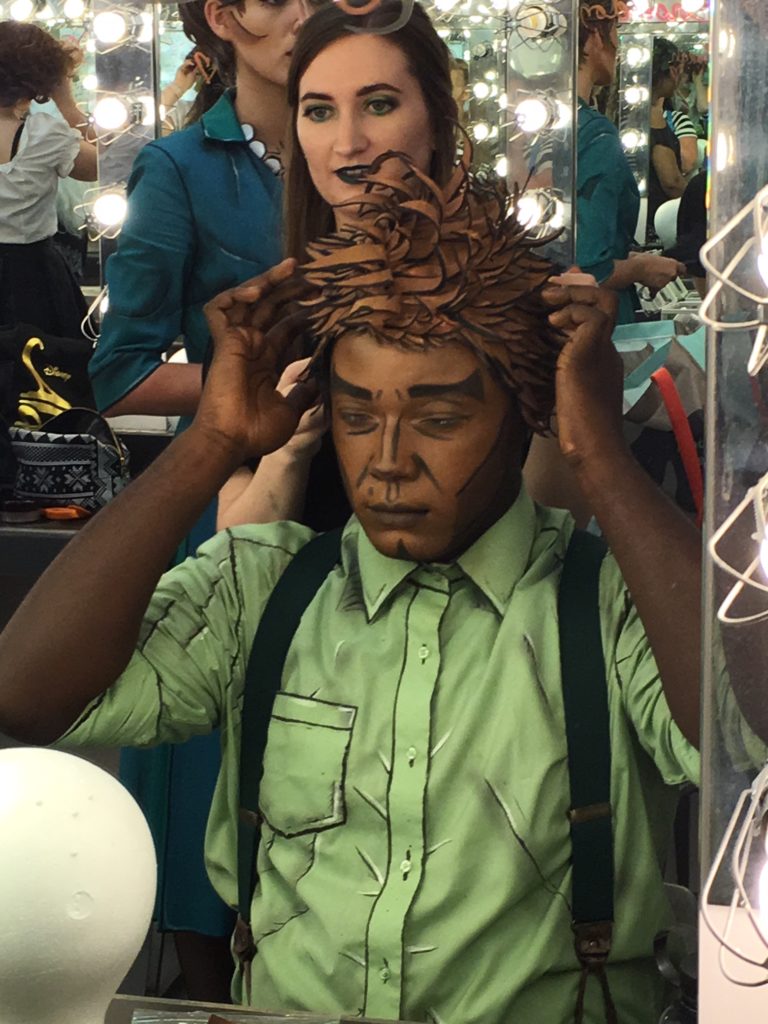 JOHN: When we first started talking about the cartoonish, two-dimensional look, I didn’t realize that there was a Clue graphic novel based on the characters.

VCOS: Is that where you got the designs for the wigs? Or is that your invention?

NICHOLE: No, they were kind of all my invention. I played off the character tropes and the stereotypes. Mrs. Peacock has a kind of a French twist that was very 1950s, and there was Mrs. White, the Cockney maid, and her little bun. That was the fun part because none of these looks were things that had been done before in the cosplay community. So we kind of had to reinvent them and find techniques to make them based on what others had already done.

VCOS: Which was the hardest one to do?

JOHN: How do the wigs hold up?

NICHOLE: They are glued with Barge contact cement, which is a very strong cement that is used for shoe soles. The only thing is that the paint chips a little bit so every so often we’ll go over it with a paintbrush and clean it up a little. But they hold up surprisingly well. All the wigs have been sprayed with Plastidip, which is a plastic spray paint. There are a lot of home improvement videos for that stuff. You can spray your boat with it and it will hold up when you take it on the water. It’s kind of like Flex Seal. Because we EVA foam, which is what we use to make the wigs, is very porous, bacteria can get in there, so we heat seal them which shrinks the pores and then Plastidip them to give them a protective layer. That way, we can go back every night and spray them down with alcohol and sanitize them and no bacteria will grow on them.

JOHN: It’s interesting about the bacteria element. Was that something you knew about going into this?

NICHOLE: Yes. I have a background in performing so I know how stinky and nasty costumes can get, especially when they’re not cleaned regularly, so that was a big concern. I want them to be able to be cleaned and washed so that’s why we used a specialty paint on the costumes. It’s called Gac 900, it’s a plastic-based acrylic fabric medium that you mix in with acrylic paints so that you can wash it. It basically plasticizes the paint. We Fabreze down the outer garments which get washed every night and they’re also wearing T-shirts underneath to protect them from sweat and odor. We can wash these; it’s just a little difficult to keep their integrity intact.

VCOS: Is movement restricted at all?

EVAN BANKS (Professor Plum): Only a little bit when I move my head back, but not a lot. It’s pretty flexible considering how much is done to it. 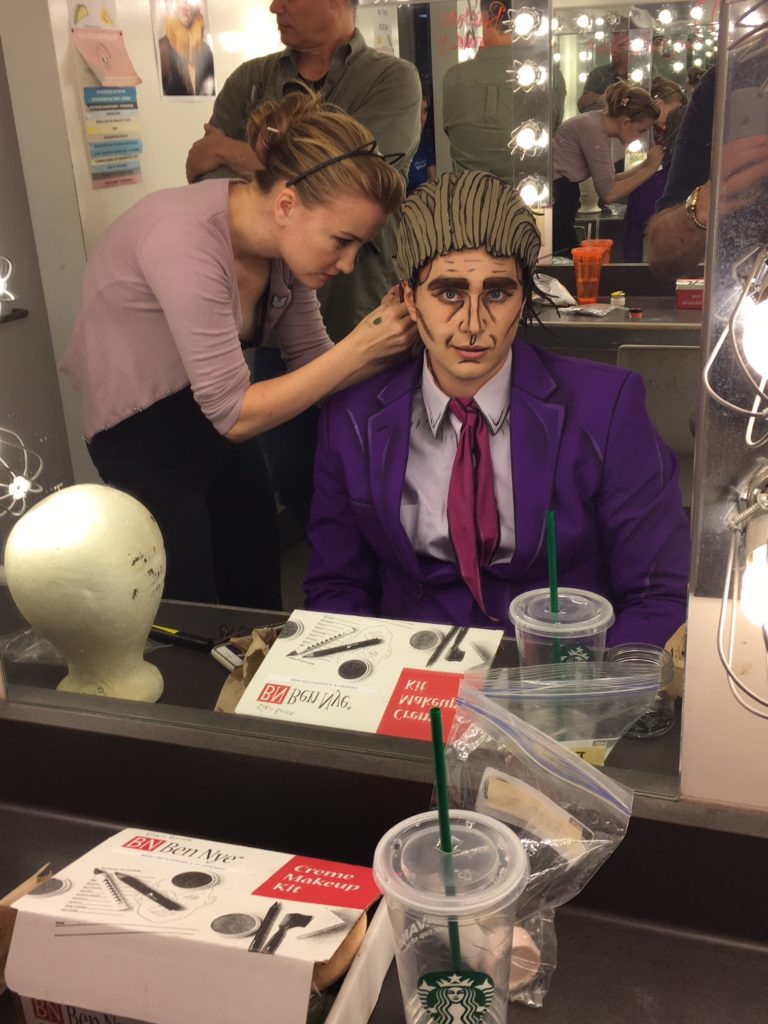 JOHN: We have a very physical show. They day before we did our first tech, with all the costumes and makeup and everything, I sent out a warning: FYI – I talked to the actors that if they felt anything pull or tug not to do the physical movement. We’d rather go let something out first as opposed to fixing a tear. When you look at the detective’s wig, well, she rolls around on the ground at one point and her hat is actually attached to the wig so I was concerned about whether these things could take that kind of physicality. But they’ve all held up remarkably well.

VCOS: The detective’s outfit kind of looks like a zoot suit. Where did that come from?

JOHN: We were going for a Carmen Sandiego look.

NICHOLE: And it suited the character so well, it was kind of like an homage to video games and things that are really cartoony and bright.

JOHN: And it probably came from the Borderlands concept.

VCOS: The whole look is very surreal and fascinating.

JOHN: Yes, and when you put it up under the theatrical lights, it takes on a whole different look.

CAM SHERMAN (Gamesman): When you look at it from the audience’s point of view, you see different shadows that you wouldn’t be able to see anywhere else. It changes the person’s makeup to a whole different kind of concept. It’s one of those amazing things to see when the lights go up and you’re just watching all these people, with all of this really cool, macabre makeup on, it literally morphs in front of your eyes. It’s just the most interesting thing to see, and it takes place only when you hit the light switch.

JOHN: The show is supposed to start with Mr. Boddy lying dead on stage, but we wanted the look to be showcased before we even started so we took one of the verses from “The Game,” the opening song, and had them perform that in the saturated light, with one for each one of the characters. Then we do a slow fade up with the lights so the audience can see the concept of the costumes, the makeup, and the hair, and let them take that in with the music. Then we start the show.

VCOS: You added the three characters you call “The Gamesmen.” What was the reason for this?

VCOS: They actually add a lot to the show.

JOHN: And it helps with the enrollment that I need for shows and I didn’t want to tell these people, “you only get to move furniture.” I wanted to give them more to do than that. So they are part of the fabric of the show. That’s part of the beauty of it, they break the fourth wall continually in the script, they get members of the audience to pick the cards and they engage in the audience with looks and gestures and things like that.

CAM: We’ve been working on everything that we can do to make ourselves our own characters because we’re not in the script. There was no background for our characters. So when we got tested, we had no clue what we were going to do.

CAM: And we made our own characters from those things. Since I have the weapons cards, I’m kind of a creep, so I mess and mingle with the audience in kind of a wild craziness. And when the lights go on, I get into a whole new personality. Going into it not knowing who you are, but then getting the makeup on and standing there under those lights, you become something that you cannot be anywhere else.

JOHN: It really frees them up to do things on stage, but it’s not until they put their “persona” on, with the costumes and the makeup, that they get it. “Oh! I see what I’m supposed to be now.”

CAM: The gamesmen costumes are kind of like those of mimes. I’ve been told by eighteen people that I need to carry a loaf of bread on stage. We’re the ones helping make the game and run the game.

JOHN: That’s the beauty of working in an educational facility. We can touch on all these tropes that we talked about in classes and the historical and regional world of theater tropes and themes that we can bring in and reinforce what we learn.

Clue: The Musical finishes its run at Moorpark College August 5. For dates and showtimes, see the VC On Stage Calendar.

"The Laramie Project" - Riveting Anatomy Of A Murder

A Chat With New Elite…