When the newly-revamped national tour of Let It Be was scheduled to arrive in Thousand Oaks, I decided to go, despite having undergone a spell of Beatles tribute fatigue. Innumerable “tributes” to the Beatles have been staged in the 40+ years since Beatlemania hit Broadway in 1976 and most have been pretty much the same. The first half would feature the “Fab Four” years with the pretenders-of-the-day dressed in the fashionable collarless suits and mop top wigs of their Ed Sullivan days. After intermission they would don Sgt. Pepper uniforms and have lots of splashy lighting effects as they played songs from the second part of the group’s career. But Let It Be, which has been kicking around since it made its debut in London’s West End in 2012, revamped itself in February, adding a new element to the show that answers the musical question: What if the Beatles had reunited 10 years after their breakup? This was intriguing enough of an idea to warrant a visit to the Kavli Theater in Thousand Oaks to see this latest tribute to the most sensational musical group of the 20th century.

Act I was a de rigueur Beatles show, divided into four distinct segments of the group’s career. The Beatles’ look changed as frequently as did their music, and each year of their 10-year history together can be distinguished by different songs, different clothing, and different hairstyles.  The good thing about Let It Be is that it doesn’t dwell on the frantic Beatlemania years for very long. Those songs signified the initial hysteria of the group, but the true mark of their musical genius took place in the recording studio, after they stopped playing live concerts in 1966. In fact, only five songs form the early years went by before they dashed off stage to change while a montage of vintage television commercials from the early ’60s was flashed on two oversized “vacuum tube-styled” television screens that flanked each side of the stage. The staging was designed to represent the now familiar “converging arrows set” from the vaunted February 9, 1964 U.S. debut on The Ed Sullivan Show. The band, consisting of Neil Candelora (Paul McCartney), JT Curtis (George Harrison), Michael Gagliano (John Lennon), and Chris McBurney (Ringo Starr), performed nearly flawless versions of “I Saw Her Standing There,” “She Loves You,” “I Want to Hold Your Hand,” and “All My Loving” before Candelora concluded the set with an acoustic solo version of “Yesterday.” Although the group was note perfect in this set, it was almost too slick and mechanized, as if a 3-D printer had pumped out a copy of a typical Beatles performance. The group’s in-between patter was probably the weakest element of their act all night. Gagliano awkwardly delivered Lennon’s “rattle your jewelry” quip from the November 1963 Royal Variety concert in London, but other than that, the banter was restricted to “How are you doing, Thousand Oaks?” and other brief pleasantries. 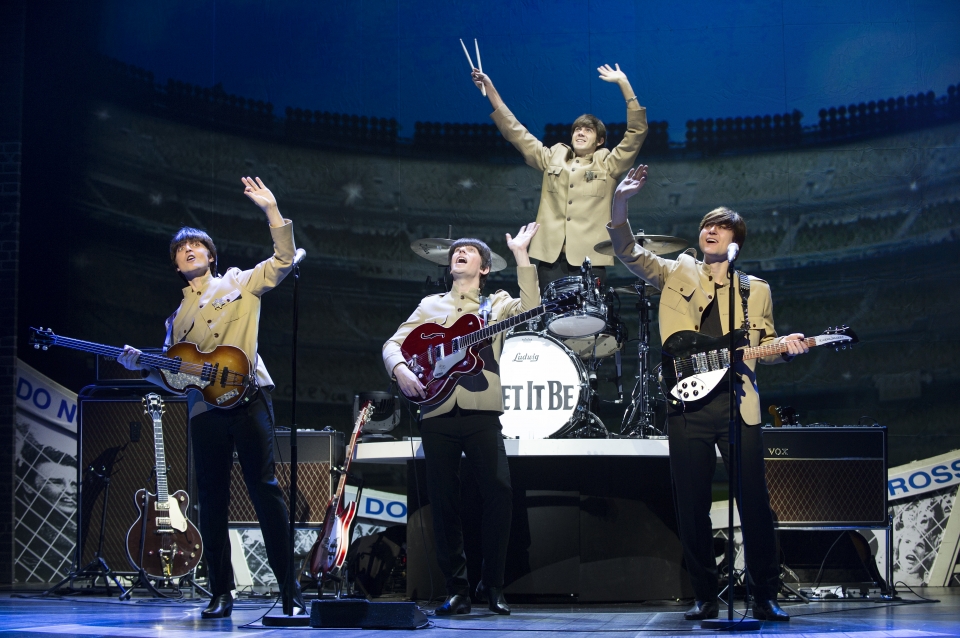 The second scene was set in old Shea Stadium in New York, where the Beatles famously appeared in popular music’s first arena concert on August 15, 1965. The Let It Be quartet was outfitted appropriately in the tan Nehru jackets worn by the Beatles on that occasion. Songs performed included “Help!”, a nice solo by Curtis on Harrison’s “I’m Happy Just to Dance With You,” “I Feel Fine” (with Curtis re-creating the famous feedback opening note), “Twist and Shout” (with Gagliano inviting the audience to get to their feet), and “Day Tripper.”

The expectant crowd sounds of Sgt Pepper’s Lonely Hearts Club Band prefaced the inevitable psychedelic segment of the show, triggered by the group singing the legendary album’s opening medley of the title song and “With a Little Help From My Friends.” Any Beatles record made after their final live performance at Candlestick Park in San Francisco in 1966 featured much studio wizardry, sound effects, and unusual musical instruments, so Let It Be features the talents of its on-stage musical director Daniel A. Weiss, who was able to duplicate the sounds of the piccolo trumpet on “Penny Lane” as well as other familiar effects from post-Sgt Pepper albums. 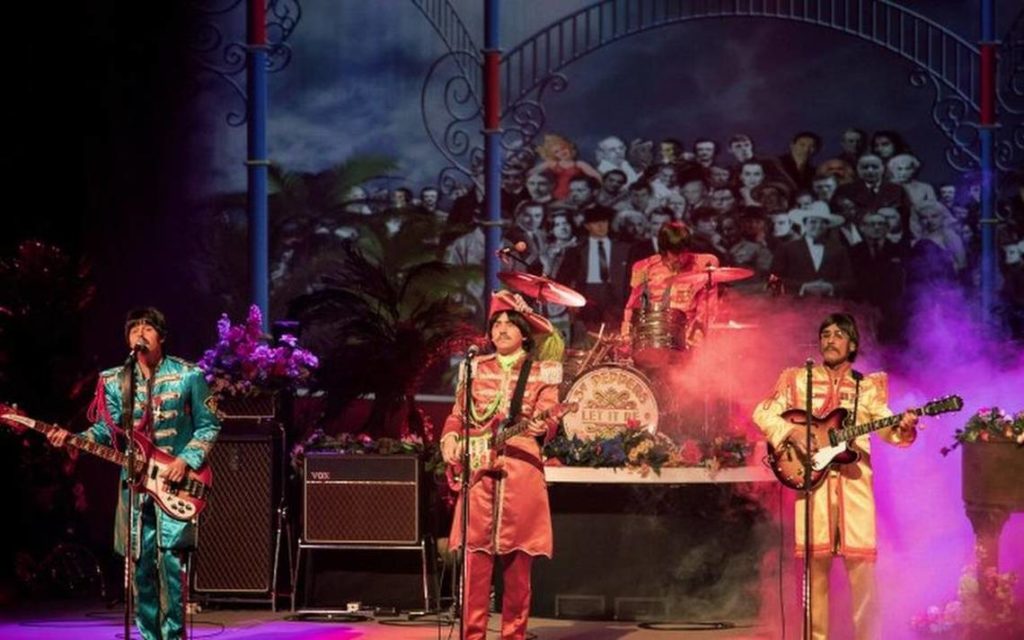 The band finally hit its stride on “Strawberry Fields Forever,” with Gagliano moving to the piano to sing John Lennon’s famous vocal. Effectively bathed in red light, the stage featured abstract amoeba-like images floating on the rear projection screen. Of the four, Gagliano’s voice was the best approximation of the original singers. Candelora was excellent on Paul McCartney’s more raucous vocals but tends to sing through his nose on the softer numbers. Curtis, an outstanding guitarist, nailed all of Harrison’s solos throughout the night but has trouble with Harrison’s accent, while McBurney, despite utilizing an odd, trembling vibrato on his vocals, provided solid drum work as Ringo. Other songs in this set included “When I’m Sixty-Four” (with Gagliano sardonically asking the audience of aging baby boomers to “let your hair down…if you can”), the hard-rocking reprise of “Sgt Pepper’s Lonely Hearts Club Band,” and a well-done version of “A Day in the Life,” albeit with abbreviated elements of the famous long rising crescendos that punctuate the piece.

Skipping completely over the White Album (something that most tribute bands ignore as well), the group emerged for the fourth scene in front of a poorly illustrated mock-up of the Abbey Road zebra crossing (a strangely barren scene, with trees only on one side of the street with a battered Volkswagen parked at the curb).  The band was dressed in the outfits the Beatles wore on the Abbey Road album cover, with a barefooted Candelora in an Oxfam suit, Gagliano in all-white, Curtis in blue denim, and McBurney in an Edwardian-style black frock coat. Gagliano again delivered a superb Lennonesque performance on “Come Together” after which Candelora did a rocking version of “Get Back” as Weiss played the familiar Billy Preston electric piano solo. The final two songs were simply unadulterated Beatles rock ‘n’ roll at its best: a searing version of “Revolution” and the Abbey Road rocking jam “The End,” concluding with the famous credo, “the love you take is equal to the love you make.”

The highly anticipated “Beatles reunion,” which was added to the show for the current tour, was supposed to have taken place on John Lennon’s 40th birthday, October 8, 1980, two months before he was murdered. The front line of Candelora, Gagliano, and Curtis harmonied on an a cappella version of “Because” from Abbey Road before launching into the brassy arrangement of “Got To Get You Into My Life.” Although the date is supposed to be 1980, Gagliano is dressed in the army fatigues and New York City tank top made famous by Bob Gruen’s famous 1974 photograph of Lennon.

The second half of the show was beautifully performed by the group, giving not only accurate but thoughtful performances of what the Beatles might have sounded like performing each other’s successful solo efforts from their post-Beatles careers. Curtis sang “What Is Life?” and “My Sweet Lord” from All Things Must Pass, Candelora did McCartney’s Wings hits “Jet” and an exciting version of “Live and Let Die.” McBurney sang Ringo’s first hit, “It Don’t Come Easy,” and Gagliano did a wistful version of two songs from Lennon’s final album, Double Fantasy, “(Just Like) Starting Over” and “Watching the Wheels,” which resulted in gasps from the audience when they recognized the intros. When Gagliano started singing Lennon’s “Imagine,” only the illuminated waving cell phone flashlights in the audience reminded us we were in another century. In other highlights, Gagliano, Candelora, and Curtis sat on stools (an image the Beatles never showed during a live concert) to sing Harrison’s Abbey Road classic “Here Comes the Sun” and Candelora did a nice solo version of “Blackbird,” finally representing the White Album.

The group then performed a two-song medley paying tribute to the Beatles’ rock ‘n’ roll roots: Gagliano belting Larry Williams’ searing “Slow Down” and then Candelora shrieking out Little Richard’s “Long Tall Sally.” The last song featured Curtis playing Eric Clapton’s famous guitar solo on “While My Guitar Gently Weeps,” which once again brought the audience to its feet.

The enthusiasm by the crowd in hearing songs that were never performed by the Beatles together was palpable, resulting in no less than three encores from the group, all easy to guess: the anthemic “All You Need Is Love” (bringing the lit cell phones out once again), McCartney’s gospel-like “Let It Be,” and a rousing “Hey Jude,” sending the audience na-na-na-na’ing out into the night.